Conserving grasslands and species through regenerative ranching and grassland restoration

The objective of the project is the conservation of the grasslands and species that inhabit Rancho El Uno (ReU), through low stress bison handling, regenerative cattle ranching and grassland restoration.

ReU has operated as a nature reserve for the conservation of Chihuahuan desert grasslands for the past 15 years; it encompasses 18,546 hectares in the heart of the Janos Biosphere Reserve. ReU represents one of the most important sites on the continent for migratory birds and emblematic species, such as the American bison, the black-tailed prairie dog, and the golden eagle. ReU is a key piece in maintaining the functionality of the binational biological corridor that connects the Great Plains in the United States with the Mexican highlands.
In Mexico, thanks to a large multi-institutional effort, progress has been made in the recovery of the American bison (Bison bison) in the wild. In 2009, 23 bison were reintroduced into ReU from conservation herds in South Dakota, USA, and in 2018, when ReU went into FMCN stewardship, the herd numbered 230 individuals; today it is 290, which requires correct handling to maintain the health and viability of the bison population. In November 2019, 19 bison were moved from ReU to the plains of Coahuila, in the El Carmen Natural Reserve, within the Maderas del Carmen Natural Protected Area, in a coordinated effort between the National Commission of Protected Areas, the General Directorate of Wildlife of the Ministry of Environment and Natural Resources, CEMEX, AES Mexico and FMCN.
The operation and administration of ReU is the responsibility of the organization Cuenca de Los Ojos, A.C. (CLO), which has dedicated the last 40 years to the restoration and protection of Mexican grasslands in northeastern Sonora, in addition to having extensive experience in regenerative ranch management; an example of this is the nine properties under its custody in northeastern Sonora. The collaboration between CLO and FMCN for the conservation of ReU is formalized through a donation contract that is renewed every year.
The lines of work that guide ReU's actions are :

ReU represents one of the continent's most important sites for migratory birds and iconic species, such as the American bison, black-tailed prairie dog, and golden eagle.

FMCN, through CLO, has advanced in the systematization of biological monitoring to better understand the conservation status of ReU and to take advantage of the interest of various research projects that contribute to the effective management of the ranch. We have achieved the linkage with specialists in low-stress bison handling and, with this, favor the regeneration of the pasture with more natural processes.

Currently, CLO continues to work on the Monitoring Plan for ReU and collaborates with various organizations to include grassland bird monitoring as part of their activities. ReU employees also work on holistic livestock and bison herd management, rotating grazing to ensure better management and maintenance of the grassland. In addition, as the organization managing ReU, CLO is working on the design of a training plan for ranchers with a regenerative approach, including lessons learned from the Ranching For Profit initiative and the cowboy school at the Autonomous University of Chihuahua (Universidad Autónoma de Chihuahua). 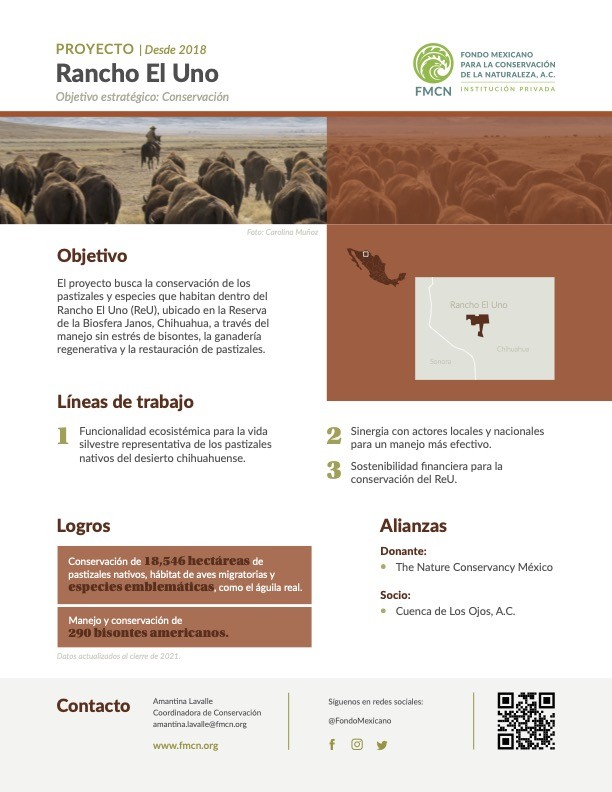