For sustainable fishing in southeastern Mexico

The  Kanan Kay Alliance (AKK, acronym in Spanish) was born in 2011 as an intersectoral initiative that seeks to strengthen sustainable fishing management to recover the biological richness and productivity of small-scale fisheries in the Yucatan Peninsula by facilitating collaborative processes and shared actions through Fishing Refuge Zones (FRZ).

The Mesoamerican Reef System (MAR) is the most critical reef in the western hemisphere, extending over 1,000 km along Mexico, Belize, Guatemala, and Honduras coasts. The health of the MAR is critically threatened by overfishing, algal blooms on corals, water pollution, and global warming.
Despite regulatory efforts in the marine-coastal zones of the Yucatan Peninsula, fishery production of some commercially and ecologically valuable species continues to decline significantly. According to the Healthy Reefs for Healthy People Initiative (HRI) the Reef Health Index (RHI) in Quintana Roo has remained "Regular" (2.8) due to the steady decline of commercial fish (939 g/100 m族) and high values of fleshy macroalgae (18%). Although coral cover slightly increased (1%), this sampling was conducted before the white syndrome outbreak (HRI, 2020).
In response to the above, the AKK is an intersectoral initiative for sustainable fishing management and marine conservation in the Yucatan Peninsula. It works on the design and establishment of FRZ.
FRZ are no-fishing zones that allow marine species to reproduce and recover, which contributes to conserving marine biodiversity and improving the well-being of the communities that depend on these resources.
The lines of work that guide the actions of the AKK are:

The AKK has promoted 17 FRZ and protected more than 19,000 hectares. It has held more than 16 General Assemblies to review project goals and agreements and has promoted the joint work of 36 stakeholders to recover small-scale fisheries and conserve habitat, including six fishing cooperatives.
In the first half of 2022, AKK achieved 40% progress in the socialization of the FRZs in the Yucatan Peninsula, thanks to the rapprochement with the fishing cooperatives El Cuyo, in Yucatan, and La Fragata de Isla Aguada, in Campeche. In addition, the AKK followed up on the renewal of the FRZ in the towns of Punta Allen and Mar鱈a Elena.
Additionally, in 2022, the first community surveillance training workshop began with the Celest炭n Fisheries Management Committee (Comit辿 de Manejo Pesquero de Celest炭n), in which 50 people participated; AKK is currently coordinating a second workshop for the Banco Chinchorro cooperatives.
Finally, the AKK held its General Assembly in a virtual format and increased its interaction with its members and allies through social networks and the quarterly newsletter. 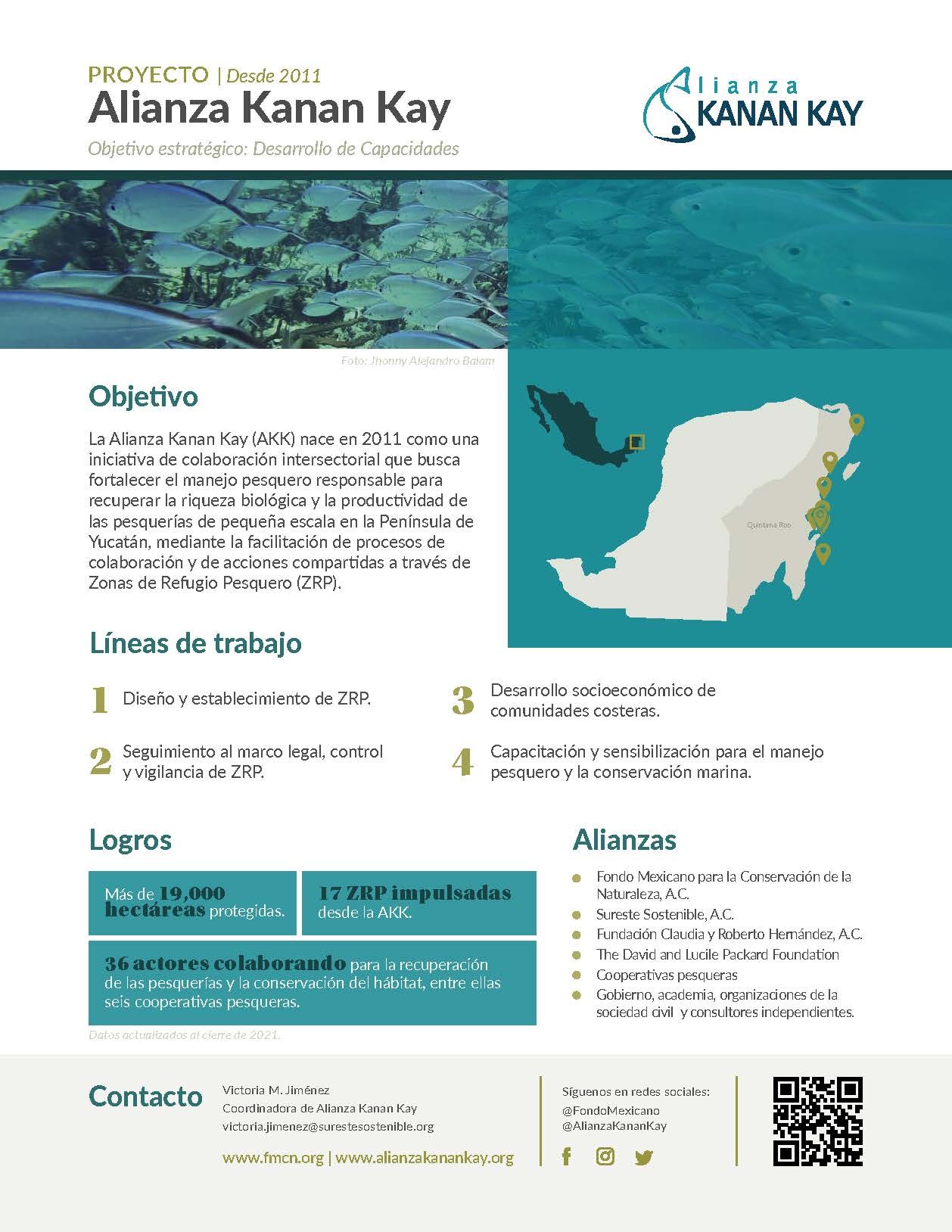