A long-term financing mechanism of non-renewable and heritage resources

The FGC is a mechanism for long-term financing of non-renewable and heritage resources which finances strategic conservation actions in marine-coastal PAs and their areas of influence.
In 2009, The David and Lucile Packard Foundation, Global Conservation Fund and International Community Foundation created an endowment fund whose interests support efforts for the management and conservation of ecosystems and natural resources in priority marine-coastal PAs of the Gulf of California and the North Pacific. The FGC's non-renewable resources come primarily from a funding mechanism linked to nature tourism, through a tripartite cooperation between FMCN, The David and Lucile Packard Foundation, and contributions from passengers aboard Lindblad Expeditions cruises.
The initiatives financed are aimed at ensuring citizen participation in the management of marine-coastal natural resources and strengthening the social cohesion of coastal communities.
The lines of work that guide the actions of the Gulf of California Fund are:

The funded initiatives are aimed at strengthening the social cohesion of coastal communities.

Since 2004, the FGC has financed 136 initiatives through 52 civil society organizations and research institutions that have strengthened the operation of PAs and social cohesion of coastal communities, promoting instruments for fisheries management and sustainable tourism alternatives. Almost 30 endangered species of high biodiversity value, such as the gray whale (Eschrichtius robustus) and the black turtle (Chelonia mydas), have been protected.

In the first half of 2022, the FGC financed 12 subprojects that contribute to the conservation of the marine-coastal ecosystem network of the Gulf of California and the North Pacific region, as well as to the strengthening of the social cohesion of and economic recovery of communities in the northwestern part of the country, following the adverse effects caused by the COVID-19 pandemic. The subprojects include environmentally responsible, economically viable activities focused on fisheries management, sustainable tourism, and species monitoring. 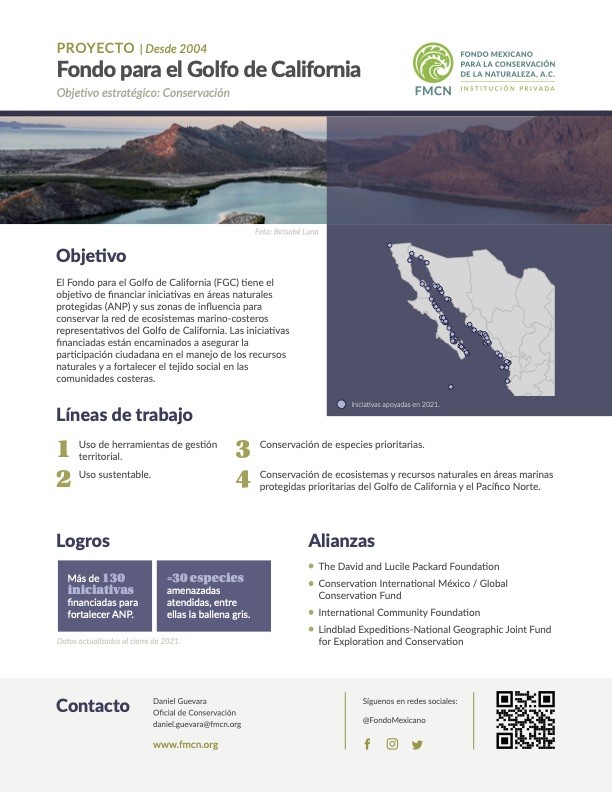