Protecting the biodiversity of the Calakmul Biosphere Reserve

The Calakmul Conservation Fund aims to ensure the maintenance, protection, and enrichment of biodiversity in the Calakmul Biosphere Reserve (RBC, acronym in Spanish) and its area of influence through payment for ecosystem services (PES) to three communities (ejidos) in the region, thus maintaining the connectivity of the jaguar habitat.

The RBC is a protected area located in the state of Campeche. It protects more than 80% of the plant species of the entire Yucatan Peninsula, 350 species of birds, and around 100 species of mammals. Its importance increases every day since it shelters one of the most emblematic endangered species in Mexico: the jaguar (Panthera onca). This feline, which in its time was revered by the Mayans, has a population of 4,800 individuals in the wild as of today, and about 5% live in Calakmul; however, they continue to be threatened by poaching and habitat loss.
In 2017, we joined forces with Conservation International Mexico, the National Commission for the Knowledge and Use of Biodiversity (CONABIO, acronym in Spanish), and Amigos de Calakmul, A.C. (Friends of Calakmul, a non-profit organization), to reverse this critical situation. With the support of academic institutions, civil society organizations, and ejidos from the region, we have implemented concrete measures aimed at maintaining the forest cover, raising awareness among the local population regarding the jaguars’ situation, and proposing measures to take care of the population and habitat of this species.
The line of work that guides the actions of the Calakmul Conservation Fund:

The Calakmul Biosphere Reserve (RBC) is a protected area in Campeche that protects one of Mexico’s most emblematic species: the jaguar.

Since 2017, as part of the project "Payment for ecological services in ejidos of the Calakmul Biosphere Reserve," with concurrent funds from the National Forestry Commission (CONAFOR, acronym in Spanish), annual payments have been made to three communities (ejidos) (Pustunich, Yohaltún, and Laguna Om) for the conservation of their forest extensions located in the buffer zone of the reserve.

During this same period, Amigos de Calakmul, A.C. conducted an annual evaluation of forest cover for each of the ejidos. According to the report for 2021, there were no significant changes in the surface areas of the different types of vegetation. However, the community brigades have reported the presence of people and small cleared areas. To avoid this situation, the number of surveillance and protection patrols in the forest area has been increased.

During the first semester of 2022, FMCN disbursed payments for environmental services to two ejidos within the RBC through the Mexican Forest Fund. 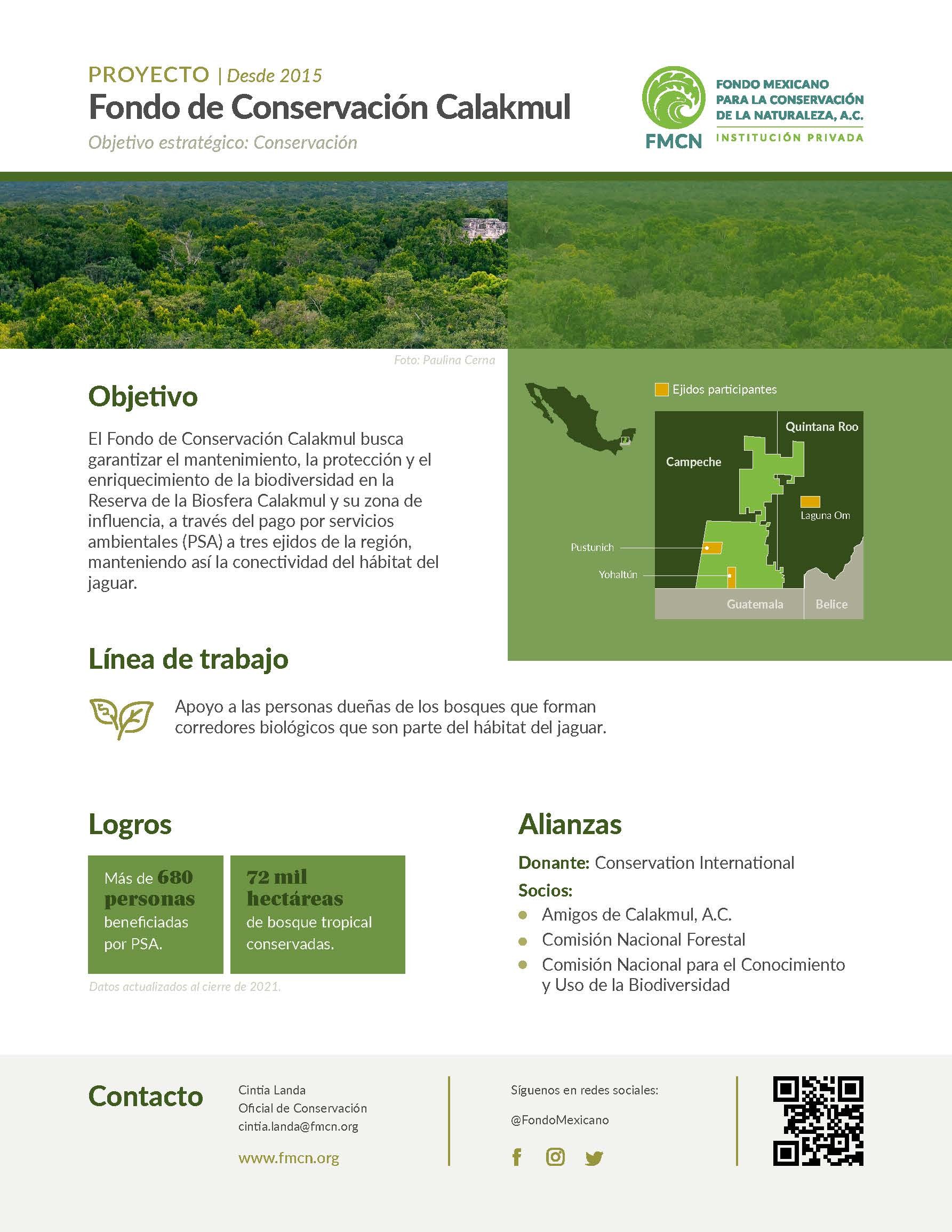